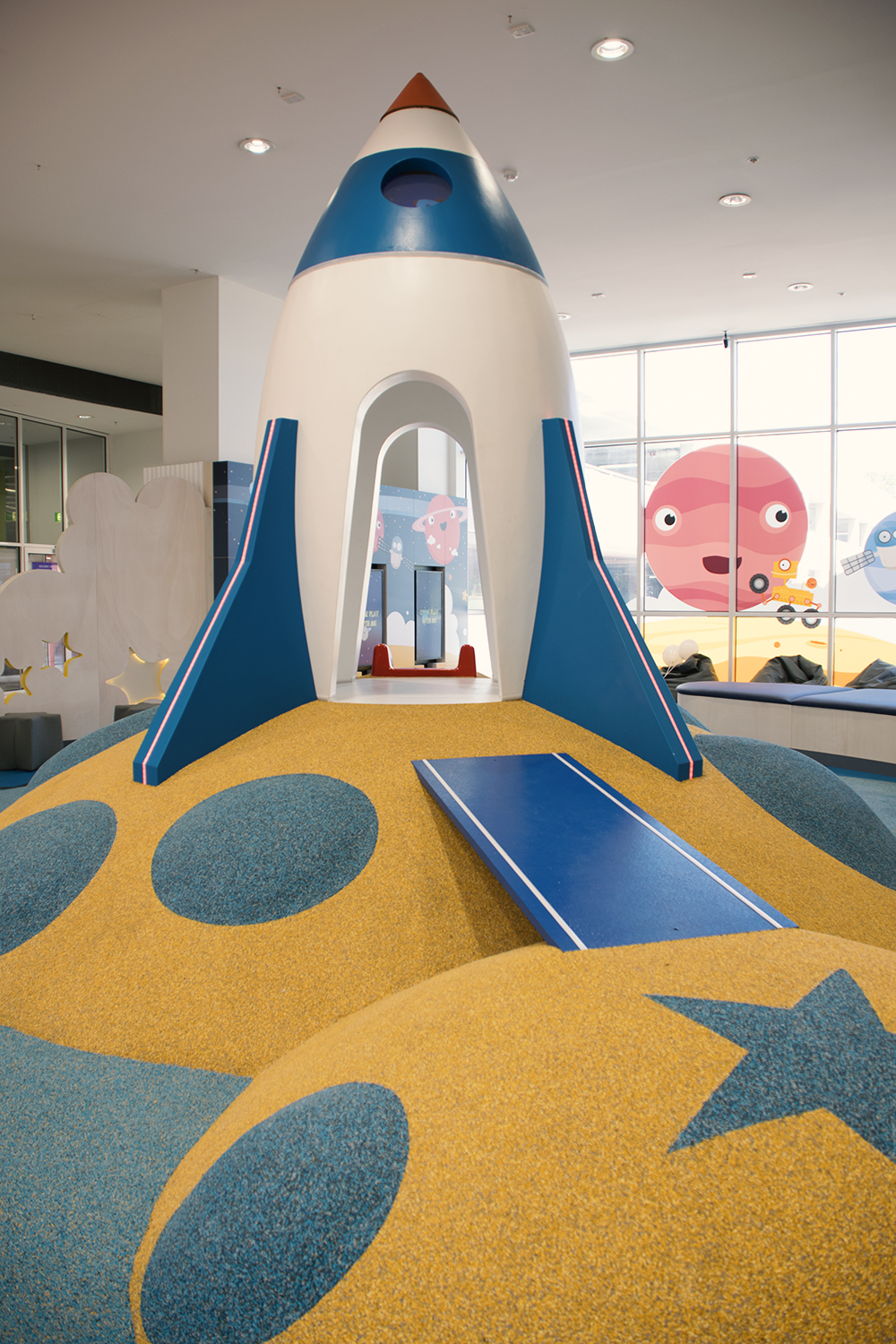 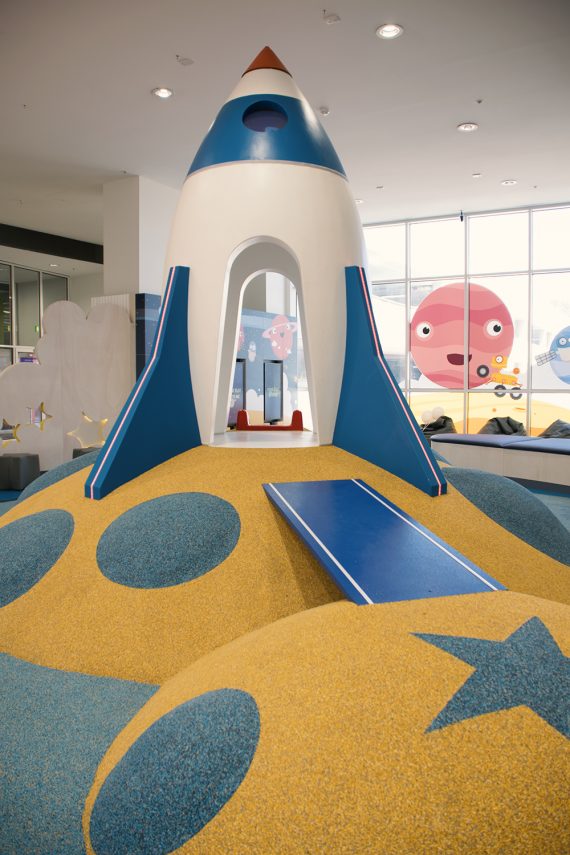 The humble playground gets a firmware upgrade.

The humble playground better watch out; it’s now being challenged by a digital, interactive, and responsive turbo-charged version that provides real time management and measurement data.

The playground would provide a focus and an attraction for kids up to 12 years old, helping to activate the area for Vicinity’s food and beverage tenants.

Vicinity had a theme in mind: outer space. It knew it wanted a rocket, and a quiet space for kids and parents to chill and read a book. In other words the area would be more than a jungle gym, the Vicinity Kids project would be educational as well as fun.

After years of working together Vicinity (and Colonial before it) knew the whip-smart people at Interactivity could run with the space theme and device and deliver an integrated 21st century playground that would educate, delight and divert.

Opening in the weeks before Christmas the new playground has been an instant success. Interactivity delivered the aforementioned relaxed reading nook (with “über comfy  beanbags”) but from there the physical world of play combines with smart sensor technology and touchscreens.

Even before a child enters the playground they’re attracted by the flashing LED stars cut into the perimeter fence. Alongside the stars are clouds that appear to float when a child climbs them to trip a sensor that illuminates strip LED recessed underneath. The effect is instant kiddy catnip for those passing by — there’s an irresistible attraction.

Inside, the rocket is the hero. There are two sensors. One is triggered on the approach ramp, which sets a countdown sequence in motion and LED launch lights. Audio can be heard within the rocket (“10, 9, 8…” etc) and once inside the second sensor triggers the takeoff sequence. An Epson ultra short-throw projector sits in the rocket’s nose cone to provide rear projection of friendly-looking alien activity. 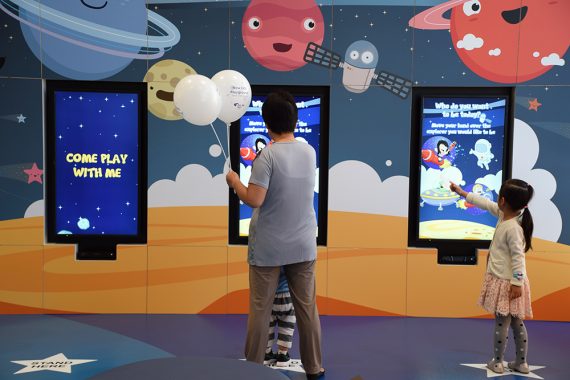 Seeing the kids’ delight in interacting with the playground should be metrics enough but there’s a raft of digital feedback as well. Interactivity’s HQ receives stats on every time a trigger is tripped and a game is launched. A full monthly stats report is furnished to Vicinity which can marry the figures to their own retail sales reports, and, down the track, a wi-fi-derived hotspot foot traffic chart. It’s a potent tool.

A bank of touchscreen tablets provide access to a suite of 20 Vicinity Kids video games (all ‘violence free and therapeutically appraised’). The UI is easy to negotiate for any kid accustomed to an iPad. A larger portrait-oriented version of the screen is provided for the older child.

With Interactivity providing the technology solution you have every reason to expect some interactivity and the Box Hill shopping centre activation doesn’t disappoint. Three NEC commercial displays in portrait mode provide the window into some Kinect-driven interactive play. The custom games, designed especially for Vicinity Kids by Interactivity, kick off with a space-suit portrait opportunity with the child’s face inserted (there’s an option to post that up to the Vicinity Facebook page), and also packs three games that include a space quiz, a variation on the classic arcade favourite, Asteroids, and an alien-tinged take on whack-a-mole. The games are only 30 seconds a throw, there’s some modestly-cranked audio and it’s all configured to be perfectly gesture-controlled by someone under five-feet tall. 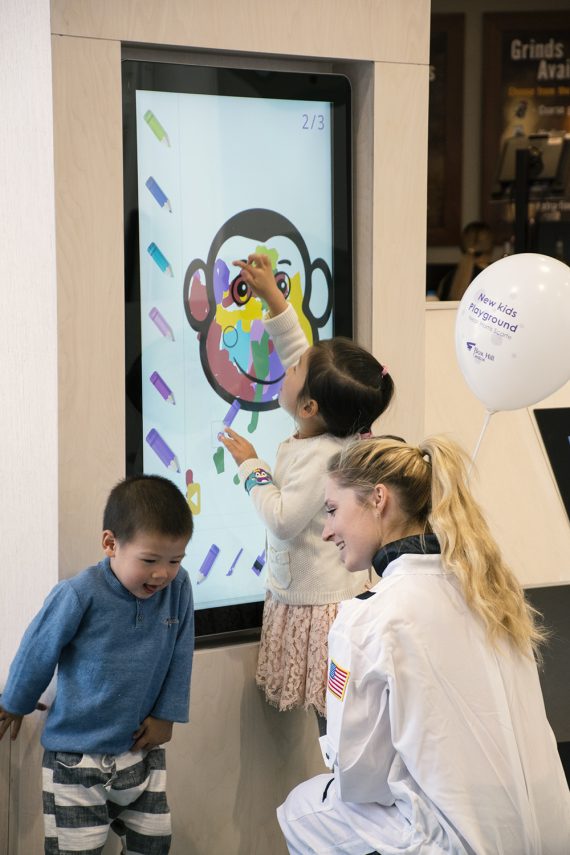 When I met Interactivity’s Projects Director Maddi Goricane on site shortly after the official launch, she and Vicinity’s management could hardly have been more pleased. “The kids are happy and that’s the true litmus test,” she noted. “We’ve done plenty of children’s attractions before, but we were pushing a number of new innovations here, which are all theoretical until you get the kids in. We’ll use our experience and the metrics we glean from this play area to continue to tweak and refine the experience. For example, we’ll be shortly adding a new game especially for the Chinese New Year.”

The playground demonstrates how technology along with educational and physical fun can come together in one happy, squealing, delightful zone that’s just as pleasing for kids as it is for parents. This isn’t a jungle gym with iPads, it’s a meticulously integrated experience that encourages kids to play, chill and explore.