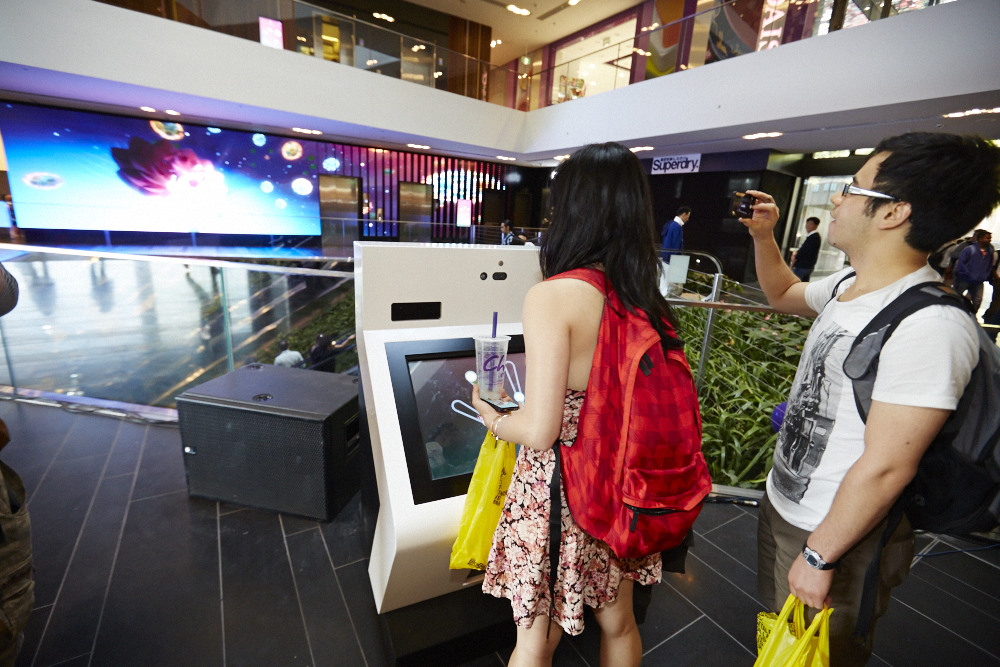 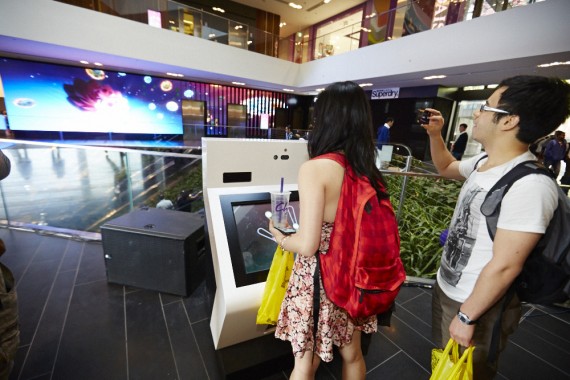 The Digital Wall at Central Park is not your average shopping mall digital signage.

Central Park is a huge $2b urban development. Frasers Property and Sekisui House have taken the old brewery site and turned the prime inner west central Sydney location into a hub for young urban types to eat, live, play and shop.

Situated at the heart of Central Park is ‘Central’, a multi-level vertical mall boasting  sustainable architecture, unique designs and features. Complementing the dynamic, arty atmosphere is The Digital Wall. Actually, digital wall, undersells this installation somewhat, the indoor interactive LED screen is the largest of its kind in a retail precinct in the world. Designed by internationally renowned lighting expert Bruce Ramus, the permanent installation fuses art, technology and design — which just about describes the whole Central Park development.

A NOSE FOR THE LED

Bruce Ramus was originally approached by the centre’s creative agency BMF. BMF knew it wanted a ‘Digital Wall’ for engaging content and interactivity but it was Ramus Illumination that took the idea and ran with it.

Bruce Ramus: “The first thing I did was change the viewing distance. With a screen this large you want the ideal viewing distance to be further than the area around the lift entrance. We positioned the kiosk [where patrons interact with the screen] on the other side of a void 18 metres away. At that distance, LED was the only practical technology to use. LED also meant we could do without the seams you get between displays.”

Bruce and his team then got to work generating the content — 12 videos and three games. The video content is immersive, beautiful even; while the game apps are surprisingly challenging for a large-format public display.

Bruce Ramus:  “We collaborated with a video gaming company, Current Circus, to develop three different apps. To play, each game requires the player to ‘donate’ their heartbeat via a sensor. From there you can play Muse, for example, where you travel through space collecting organic agents that help you amass different instruments to create a song.”

Another one of the four app uses the kiosk’s Kinekt sensor to allow you to collect objects as you move or dance.

Let’s be clear, these aren’t games for toddlers, they’re aimed at uni students or older hipsters. They’re funky, and in their own way, challenging — not Diablo III-challenging, but more than a digital creche for kids.

There are four cameras recessed into the lighting trough above the screen which will provide further interactivity, but haven’t been activated yet. Bruce describes how the cameras map the area around the lifts for traffic and then casts those people’s shadows onto the screens — guaranteed to get attention. Bruce Ramus: “We call it ‘reflective content’: it reflects the environment where the installation sits.”

As we went to press, the Digital Wall demonstrated some of its versatility. Central is a playground for university students and O Week is one of the more pivotal periods of the year. Social networks plays a big role. Ramus Illumination developed a custom Instagram app that allows students to take their photos and hashtag those photos, which are then (after the Central moderation team weeds out all the shots that are a danger to public decency!) displayed on The Digital Wall with the protagonist’s name. 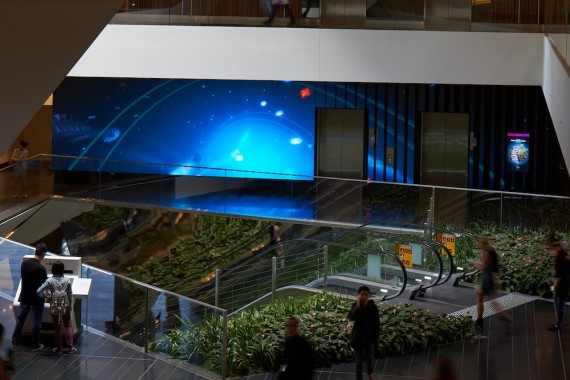 There’s no one aspect of The Digital Wall that has you slack-jawed with amazement, but in a dozen subtle ways it’s a significant evolution. Public displays are generally either an advertising billboard or a incessantly-looping foyer artwork. They’re rarely interactive. The Digital Wall is architectural, integrated, arty, edgy, interactive, commercially savvy, and always being updated. Indeed, with the development of affordable screen and interactive technologies this kind of entertainment experience — once only affordable to touring mega-stars — is now within reach of property developers wanting to establish a point of difference and a light-connection to their audience.

Bruce Ramus: Most shopping centres use a screen simply to sell as if the giant screen were the same as a home television. By doing so they miss a fundamental point about screens in public urban environments: people watch home televisions in a passive, usually seated, position. People experience shopping malls in motion, in an active environment. The Digital Wall recognises this and responds to the opportunity through gentle encouragement.

MORE ABOUT THE INSTALLATION

The 38sqm screen uses 154 customised LED panels and 2 million LEDs. The wall is draped around the centre’s elevators. Big Screen Projects supplied and installed the screen. VisionX supplied and designed the hardware behind the big screen. Working with Ramus Illumination, VisionX put together a deceptively sophisticated rig. Running much of the interactivity is a kiosk (the chassis designed by Thomas Creative) with a NEC 32-inch touchscreen that triggers content via a interface that deals directly with the Spinetix Elementi media scheduling software, which itself talks to the Ramus custom content platform.

A Spinetix HMP200 solid state media player makes the link between the Ramus media PC and Big Screen Projects’ Airled screen. Why the Spinetix player? Dion Tilley, VisionX’s project manager called it like this: “I’ve used HMP players for 10 years and I’ve never had one go down”.

Allowing people to conduct their own ‘content orchestra’ via the kiosk wasn’t enough for Bruce Ramus’ team, they wanted more interactivity. Skirting the ceiling perimeter of the area is a lighting trough which also accommodates four Panasonic security-style cameras. These map the concourse in front of the screen and can change the content as people walk through that zone. There are also a series of microphones in the lighting trough that, again, can impact the content via voice activation. Finally, the trough also houses eight ElectroVoice Evid 3.2 surface mount speakers that provide audio for some of the content or promotions.