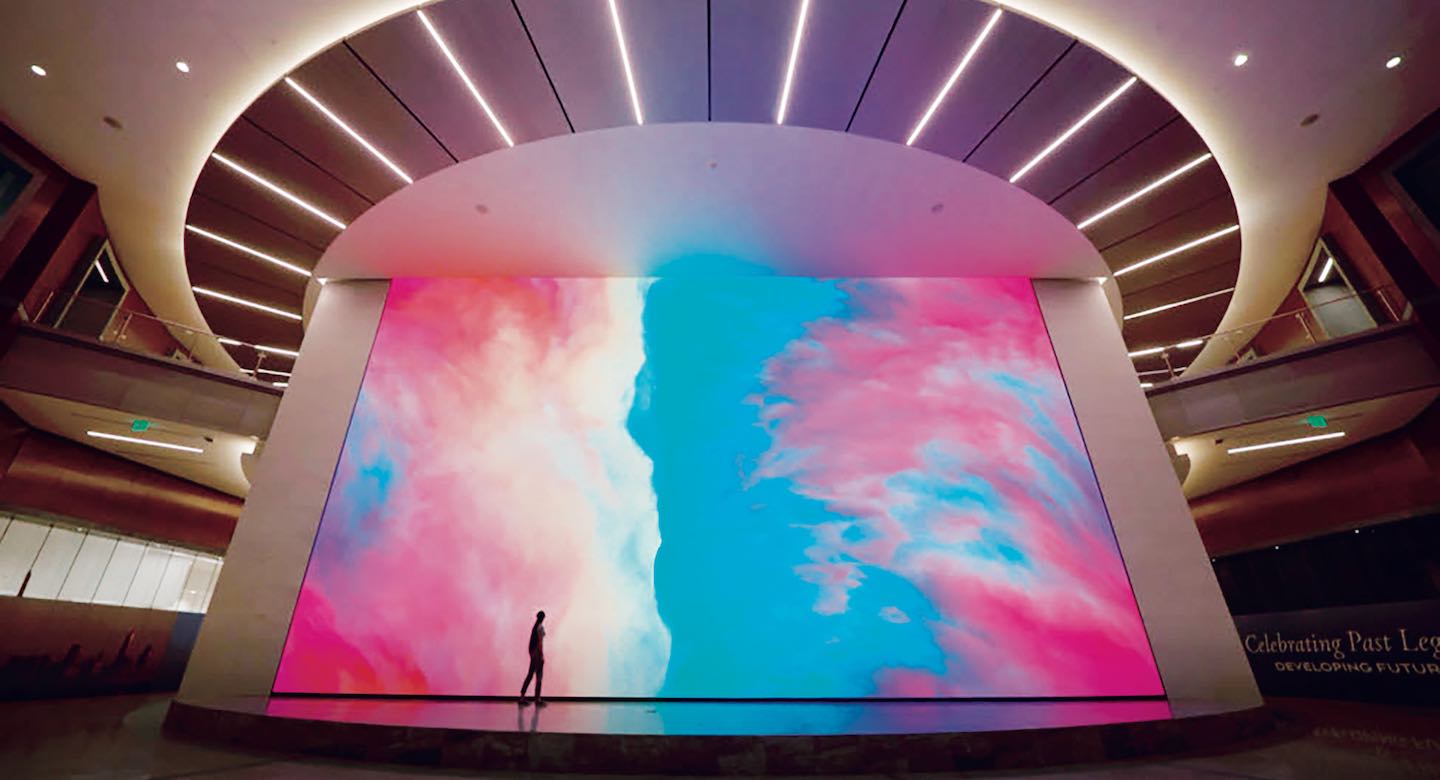 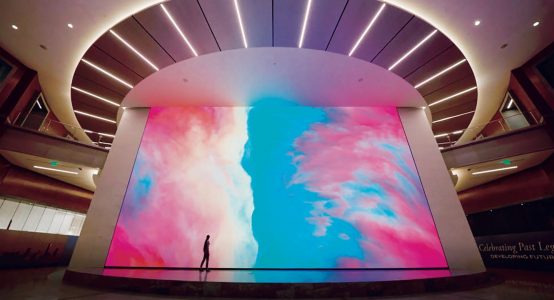 The elegant lobby within the 33‑story, 79,000‑square meter Legacy Union Tower would feature a three‑story tall videowall, with content reflecting city-centric art and history united with concepts and ideals representing the future of Charlotte.

The system had to support 4K/60 video and presentation of a single source over the entire canvas. Additional requirements included flexible windowing, seamless switching, and system automation, regardless of window number and arrangement.

The system supports any arrangement of up to 16 simultaneous sources, with an optional additional source as background to the rest. The PC is the default source, filling the canvas with one 4K/60 video image.

Two factors leading to selection of the Quantum Ultra were its capability to support the videowall’s native resolution of 4096×2304 and a modular architecture that allowed the configuration to match the design specs. These and the processor’s many capabilities made it the right choice. A few other features include a 400 Gbps HyperLane video bus, frame-locked outputs, output overlap, and adjustable mullion compensation. Also, an embedded operating system that resides on a write-protected, solid‑state storage drive and redundant, hot-swappable power supplies ensured reliable operation.

The videowall processor’s 10‑card slot frame is configured with seven IN4HDMI input cards and two OUT4HDMI output cards. The 16 cable tuners are directly connected to HDMI inputs. For the Seneca PC, an Extron DSC HD‑HD 4K PLUS A xi HDMI‑to‑HDMI 4K/60 scaler converts video from single path to dual‑path 4K/60 to feed into the videowall processor. The scaler also de‑embeds audio and sends it to the house sound system.

The Quantum Ultra upscales the source content to match the native 4096×2304 resolution of the videowall. Four outputs feed the Nanolumens LED controller with 2048×1152 / 60 Hz signals. Custom output timing rates and EDID were loaded to the processor to support this unique resolution. The 400 Gbps HyperLane video bus easily accommodates the high bandwidth demands, displaying content from the 17 sources without pixilation or loss of critical image detail.

Cenero loaded a comprehensive set of window configuration presets, facilitating ease of use and automated operation during business hours. Also, the support staff can monitor and manage the videowall remotely.

Many tenants asked to advertise on this 36′ x 64′ videowall that artistically reflects Charlotte’s past, present, and future. No other high rises in the city had anything similar. The building was majority leased well before its grand opening, and the sheer size of the installation continues to be a key space selling point. This high degree of tenancy is attributed in part to the massive videowall driven by the Quantum Ultra 4K Videowall Processor.