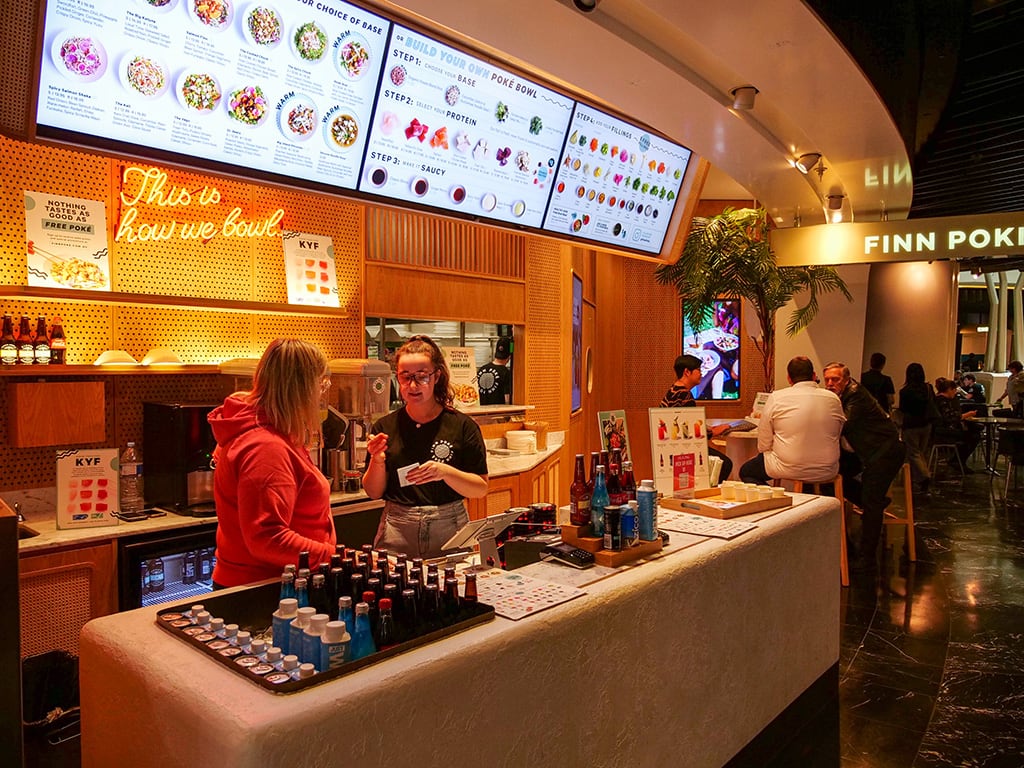 Sometimes food needs explanation. Finn Poké was glad it did.

Jem Jacinto knows the food business. After all, he learned his craft in some of the world’s toughest markets, helping his brother-in-law build the Fig & Olive fine dining chain with restaurants in New York, Chicago, DC and LA. Now that new owners had taken over, he was in Australia, looking for new opportunities.

Having watched Poké Bowl grow from a novelty to become a staple in the US food scene, Jem jumped on the opportunity to bring this concept to Australia and opened his first outlet, Finn Poké, in the heart of Byron Bay. As Jem tells it, Poké originated in Hawaii: “Originally, it was a fisherman’s food. Out on the boats they would cut up some of the fish they’ve caught to have with soy sauce and rice. Then it was popularised in California as ‘Poké Bowl’ by adding other ingredients to the sashimi and the marinade.” 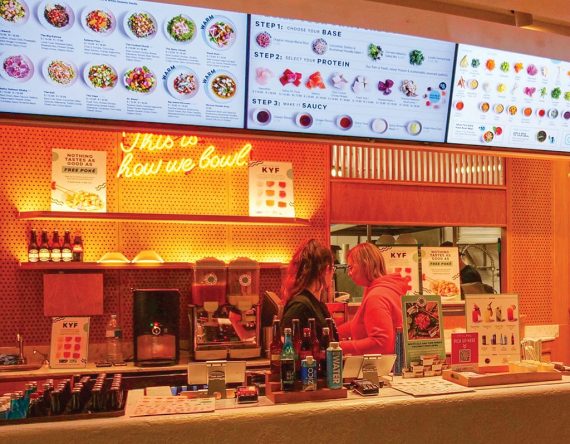 The menu at the first Finn Poké was fresh, tasty and affordable and capitalised on the region’s great produce and seafood but Poké was brand new to Australia and, early on, customers were wary. The Finn Poké concept allows the customers to build their own meal in a four-step process — or choose among a dozen signature bowl offerings. Once experienced, customers are hooked, but the wide choice could be daunting and getting prospects to take the plunge in the first outlet proved tricky.

“We started with written menus and a board on the street,” Jacinto recalls. “People couldn’t get it. They’d look at it and be like ‘ah… too hard’, so they’d move on.” With his second Finn Poké opening soon at Pacific Fair on the Gold Coast Jem knew he had to quickly find a better way to tempt customers to try Poké.

That better way arrived courtesy of old mate Rennie Dolich (now B2B National Manager for LG Electronics). Rennie recognised the text-book case for digital signage, which could illustrate and explain the menu in a way that conventional signage could not. Step-by-step, he explained how LCD signage panels could transform the customer experience – making Jem a passionate convert in the process. Rennie spec’ed LG LCD signage panels front and centre in the new outlet and helped Jem develop a content workflow that told the Poké story and enticed the customers in. Three super-bright 700 nit screens above the counter brought the menu choices to life, whilst other screens, flanking the dining area, showed off the colourful signature bowls and explained the product sourcing with a short video. 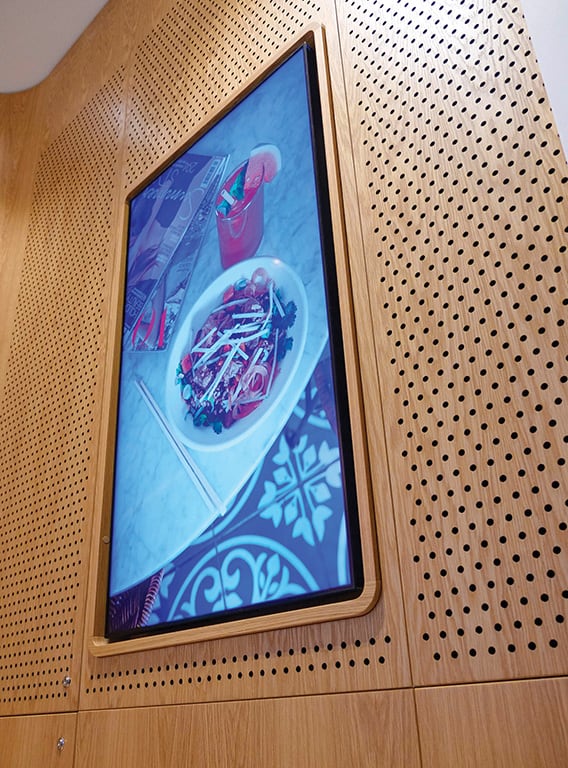 “In two weeks after the screens were installed we saw a 25 to 30 percent increase in sales,” Jem recalls. “Because they can see what they’re ordering — people get it. And our food is vibrant, our food is photogenic, our food is colourful. I mean it’s gorgeous! The LG screens really help us really portray that, and attract the customers. For me, it’s money well spent and I see the return on investment daily.”

Rennie has used the unique advantages of LG’s panels with embedded WebOS to create an architecture that suits Jem’s geographically dispersed stores. “His system is cloud-based, so his designers and PR people can log in and update content from anywhere there’s an internet connection,” Rennie explained. “There’s also software onboard made by LG called Control Plus that allows Jem to manage all 22 panels from his bedroom. He can look at what’s actually playing on, say, the Byron Bay screen, at any time of day or night. He can even do that on his mobile phone, so he can manage each asset remotely.” 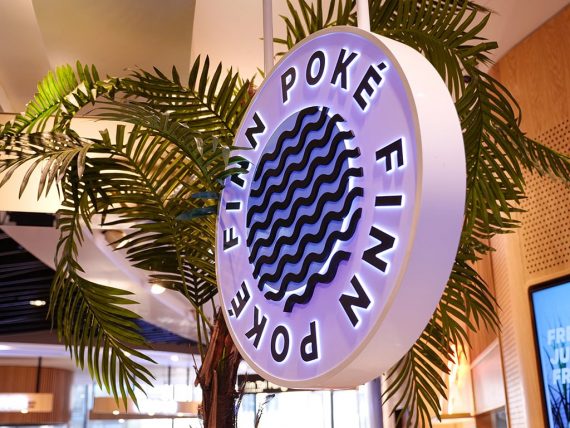 LG Panels have another advantage that keys in with Finn Poke’s seaside locations. “Conformal coatings are a really big part of these screen’s DNA,” says Dolich. “All the internal electronics have been coated in a special rubberised plastic material so that the screens are not susceptible to dust and moisture and they won’t short out or get rusty on the inside. So they are designed to be [in tough locations] like the back of a kitchen wall in Byron or Burleigh Heads”.

The digital-led kick-start to the business has seen Finn Poké now expand from Byron and the Gold Coast to outlets at Westfield Pitt Street and Circular Quay in Sydney — with more planned. Digital signage is now integrated into the design concept, with his interior designer Jessica Kim from Studio MKZ now fully on board with the signage strategy. “I was a bit hesitant because there are so many screens in the interior,” Jessica admitted. “But we trusted [Jem] and it turned out great. I mean it just marries everything all together.”