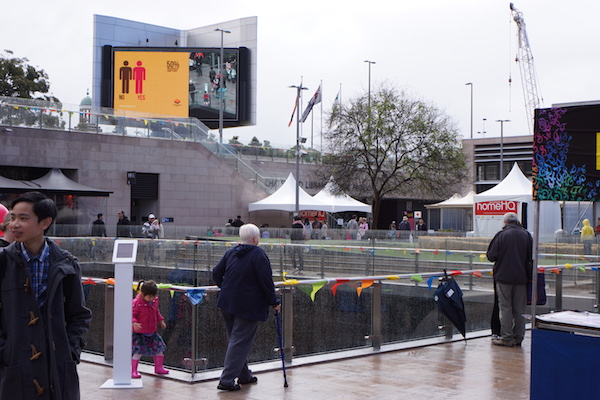 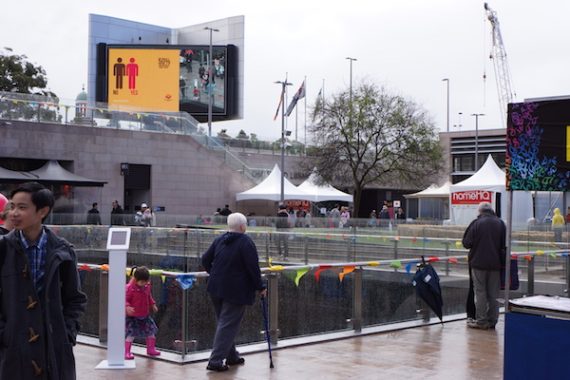 In 2014-2015, researchers from the University of Sydney conducted a study testing several digital technologies in public spaces to find more effective ways of motivating people to share their views on civic issues.

Associate Professor Martin Tomitsch, Head of the Design Lab in the Faculty of Architecture, Design and Planning who oversaw the study said: “The traditional means of public consultation through community meetings, online surveys, and telephone polling fails to reach a large proportion of the community who are just simply not interested or don’t have the time.

“The study investigated novel ways of improving two-way communication between local government authorities (LGAs) and Australian citizens to encourage a greater public voice on local and city-wide issues,” he said.

Over the period of a year, the study explored different Vote As You Go scenarios using small and large digital screens installed in public spaces with high pedestrian traffic. The screens posed questions about community issues and services provided by the LGA. People responded via a standalone web-run tablet that visually illustrated the response of voters in real-time on a large digital screen for the wider public to see. A second digital interface saw a live camera feed capture people passing by, who cast their voting preferences from where they stood, which translated their position into a ‘yes’ or ‘no’ vote on a large urban screen.

The study showed that while the tablet offered a level of voter-privacy akin to that of other public interfaces such as ATMS, the full-body interface made public opinion more ‘public’, and drew greater interest and participation from passers-by.

“Vote As You Go illustrated how playful and innovative digital technology has the potential to grab public attention and greater participation from people on the go.

“While the technology was seamlessly integrated into public areas, it was eye-catching enough to enlist wider public engagement without intruding on people’s daily lives and routines. It gave people the opportunity to share their opinions on the spot through self-initiated participation, rather than being approached,” said Associate Professor Martin Tomitsch.

The University of Sydney research, funded by the Henry Halloran Trust, will be presented at a conference this week as part of the 5th Media Architecture Biennale 2016 (MAB16), held in conjunction with the Vivid Ideas program. MAB16 is a series of workshops, symposia and events that will consider existing and future impact of digital technologies on urban planning and cities.

“Digital technology has the potential to play a more prominent role in urban life by shaping the experience of people passing through it, and creating more collaborative human-centred communities and cities,” he said.