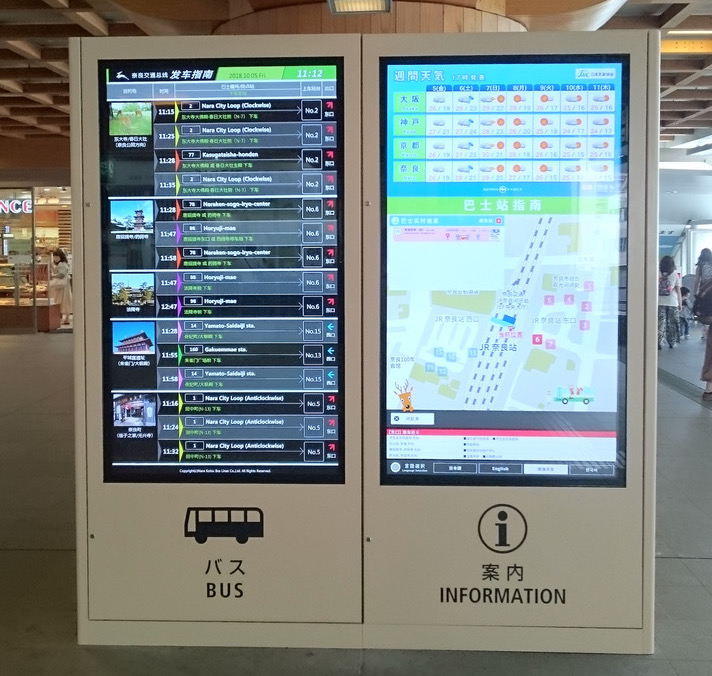 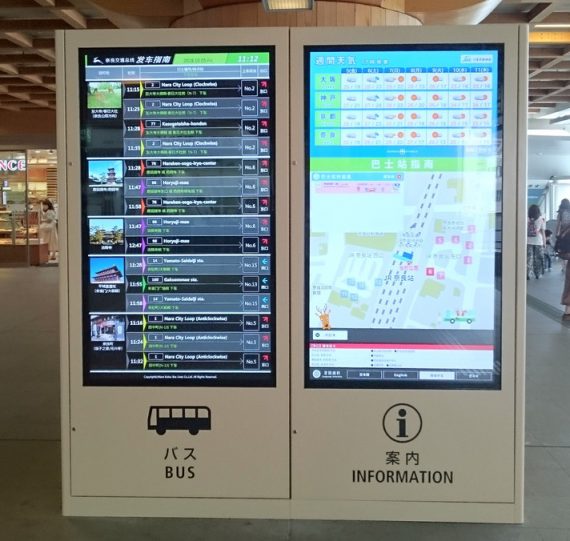 The large format digital signage kiosks have been installed onto the concourses of JR Nara station and Kintetsu Nara station, to provide locals and visitors to the region easy access to vital travel information in multiple languages, including bus timetables and locations. The JR Nara station has been equipped with a kiosk consisting of two large vertical format touchscreens, and Kintetsu Nara station a kiosk with a horizontal touchscreen. Located in the Nara prefecture in the Kansai region, the south-central region of Japan’s main island, these stations are the two main hubs for local and long-distance highway buses. The Nara Kotsu Bus Line has been providing scheduled local services including sightseeing tours, charters, and airport and intercity transport in the region since 1929, and currently serves over 50 million passengers a year.

Mr. Akihiro Yokota, product development division at HYOJITO, commented, “The touch enabled digital signage kiosks we produce are equipped with mainly original multilingual map applications. In recent years, there has been an increased demand for larger, higher resolution touchscreens that can withstand long-term use, even in outdoor environments. The design of our kiosks is very important to us as we aim to provide the highest standard of design, and that includes the touchscreen – as this is the interface with the user. As the design of each kiosk if different, we required touchscreen technology that could meet our individual needs whilst being robust enough to work reliably in harsh environments. Zytronic’s flexible manufacturing process gave us the freedom of altering the size and layout of our enclosure designs for each individual project.”

Ian Crosby, Sales and Marketing director of Zytronic, concluded, “We’re delighted to support HYOJITO with the design of these two interactive public kiosks that are now in use at important transport hubs within Japan. A reliable touchscreen is central to delivering a good experience and providing essential information to users of the stations.”

Zytronic touch technology operates reliably in the harshest environments. Zyfilm delivers the ability to support displays of any size up to 85” with single or multi-touch functionality and is provided as a clear flexible/rollable foil format that is attached to the back of the transparent surface. The ZXY100 touch controller has been designed by Zytronic to cover the full range of PCT touch sensors and supports single and dual touch detection, and gesture controls such as swipes.