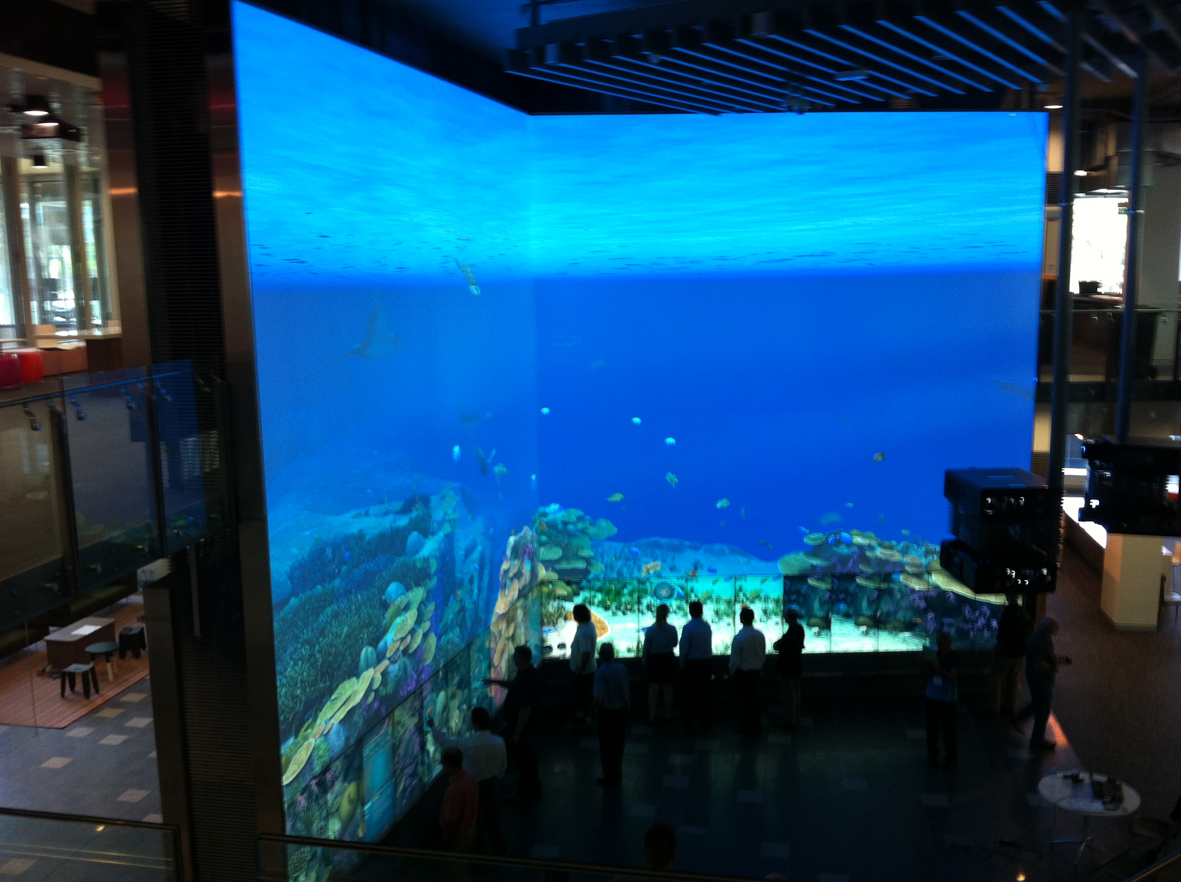 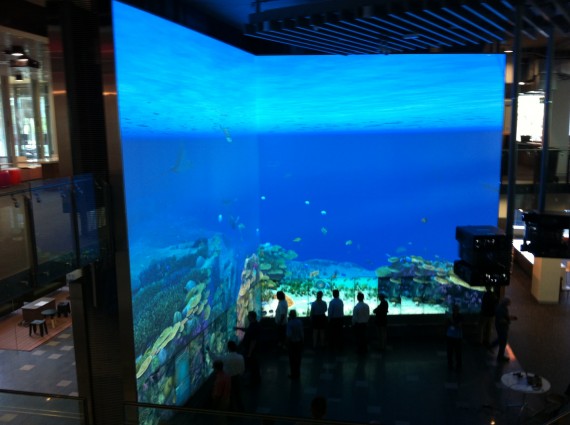 Queensland University of Technology squares off with a unique feat of audiovisual engineering.

As I walked up to the two-storey high screen, a life-sized whale appeared to eye me curiously. With a lazy flip of his enormous fluke, he disappeared into the distance, leaving the sonorous notes of his mysterious song resonating throughout the atrium.

The Cube hits you right in the face when you first walk into the brand new Science and Engineering Centre at Queensland University of Technology. It’s meant to, of course. But what exactly is it? I asked Gavin Winter, QUT’s Cube project manager.

“The best explanation is that it is a multi-node interactive display wall…” he began enthusiastically, sounding like a typical Windows error message — totally accurate but also completely incomprehensible. Sensing my confusion, he switched down a gear or two: “…but perhaps the best way of thinking about it is as a giant, $3.5m multiplayer video game that’s capable of absorbing busloads of school students at a time and switching them on to science and engineering”.

First, let’s get some facts and figures out of the way. The Cube is actually six separate display zones totalling 145 megapixels, the largest of which is a spectacular 14 metres long by nine metres high. Several of these zones are split between edge-blended projected images on top, and dozens of interactive multi-touch monitors lower down which allow visitors to interact with and control the single giant image that spreads seamlessly across the monitors and projectors. The images are real-time animations, created by a metric tonne of custom-built servers housed two floors above. Despite The Cube consuming a staggering 45kW of power when operating, the whole building is eco-friendly, powered by rooftop solar cells and recovered heat using state of the art ‘trigeneration’ power systems.

JEWEL IN THE CROWN

The Centre’s project director Anthony Perrau explained that the vice chancellor’s vision for the new structure was “to be a building that could reach out and showcase science and technology to the broader Brisbane and perhaps the world community”. The question was how to create a feature exciting enough to draw in the students — and their teachers. Perrau knew the answer lay in some form of high impact audiovisual so he called in Professors Ian McKinnon (QUT Institute for Future Environments) and Jeff Jones (Interaction Design); together they sketched out a daring brief for an interactive attraction that would fit the bill. Time was of the essence as the building was already underway, so Jones set about organising a team to convert the dream to reality.

The 55-inch touchscreens are made by Multitouch from Finland and they really are unlike anything seen before. “Their product is unique in that it is a ‘computer vision through screen’ touchscreen, which is essentially cameras seeing through the panel not only your hand, but yourself. So the touch panel knows you are there,” Winter explained.

“The unique characteristic of this technology is that it can be strung together in lengths. Typically a touch panel will have very large edges and you can’t do that.”

Each touchscreen, with its internal PC, becomes a “game controller” that several people can manipulate at once, all linked back to the servers. There are currently five different programs, all developed in-house by a team of programmers and visual artists. Though the computer and display systems are all integrated, different programs can run at once using different faces of The Cube. ‘The Virtual Reef’ is a majestic, life-size animation of a real part of the Great Barrier Reef that allows viewers to manipulate and interact with a scientifically accurate cross section of aqualife. As students explore, they learn about specific marine animal behaviours and relationships.

So does it all work? Can a bunch of projectors and monitors actually get people in and inspire them? If the visitors I saw are anything to judge, then the answer is a resounding yes. The most common comment heard from visitors was simply, “Wow!”

Winter is well pleased with the response from his visitors. “Kids know exactly what to do when they get here,” he noted. “It’s just that gravitational pull that the walls have, and straight away they go — ‘well I understand what this is; now how can I play with it?’”