The WinterFest Festival is a sensory spectacular held in the heart of Hong Kong during the Christmas season. An eight-minute animated show is projected once every half hour onto the walls of Hong Kong’s Cultural Centre building, requiring a large AV setup of several projectors, lights and loudspeakers. Australian creative projects company Artists In Motion makes it happen, creating, coordinating and conducting the entire show. The event consistently attracts over 400,000 people each year and is centrally located in Tsim Sha Tsui, visible from across the Kowloon Harbour.

Creative Director, Richard Lindsay, seems unfazed by the scale of the extraordinary visual experience: “Well, it is big, but it’s like anything — you break these things down.”

Artists In Motion is Sydney-based, but the majority of its projects are international. Last Christmas was the sixth consecutive year Artists In Motion had conducted the WinterFest show — that includes everything from writing and animating the story, to projecting it on the 50m-high, 280m-wide Cultural Centre.

The only thing rivalling the logistical challenge of such an event is what goes on behind closed doors. The Winter Festival is an initiative by Hong Kong’s tourism board with the purpose of promoting Hong Kong as a must-see tourist destination. Lindsay says convincing the board that an engaging story would be more well-received than a tourism advertisement isn’t always easy.

“One thing we have to do is educate the client. You’ve got to think about the audience, the audience’s perspective, and what they want to get out of it. You have to make it entertaining. 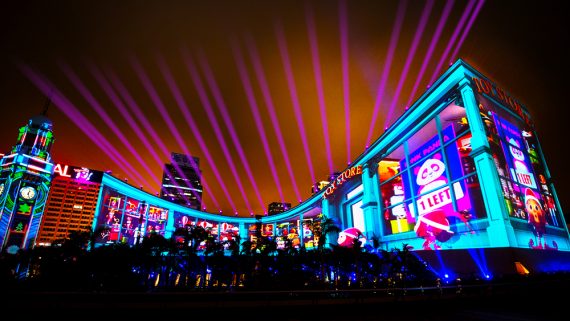 SPL-related complaints were common from the Hong Kong Cultural Centre, as performances would typically be occurring inside the building while the Artists In Motion crew conducted PA tests.

“It’s mainly because if we have heavy bass, it sends ripples through the building. But of course you need to have some serious bass in order to live up to a proper soundscape. So we play around with the Centre’s tolerance and what they’ll allow us to get away with,” says Lindsay.

There’s a lot to consider when putting together a show like this — the scale of the building relative to people’s perspective, the audience’s viewing angles, ensuring quality sound gets to all viewers, synchronisation of projectors, audio and lighting, the list goes on. Spectators could even install a smartphone app for a personal, live music feed. The wealth of knowledge gained by Richard and the team having already run the show several times proved invaluable.

The team controls the audio, lighting, playback systems, and projection from a 12m-high projection tower that sits right on the water — one of several projection towers strategically stationed around the venue.