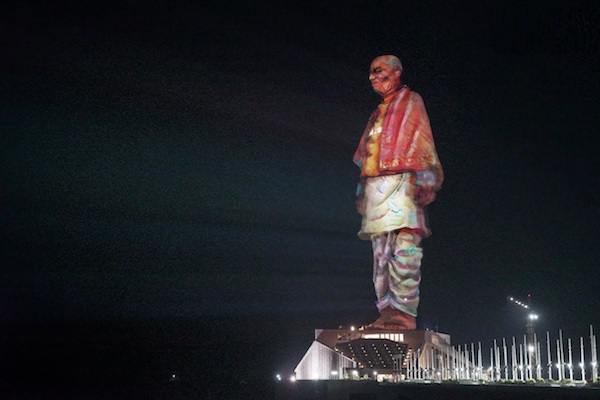 Christie’s visual solutions have been deployed for a fascinating projection mapping showcase on the newly-inaugurated Statue of Unity, the world’s tallest statue, dedicated to visionary Indian statesman Sardar Vallabhbhai Patel.

The amazing spectacle is accomplished by Christie’s valued Indian partner Pyramid Technologies and renowned German laser show producer HB-Laser using a total of 51 Christie Crimson WU25 3DLP laser projectors. The team is responsible for the complete design, installation and integration of the Crimson projectors for a professional and engaging show. This is the largest ever deployment of high-brightness projectors for a permanent installation in India. Located in the state of Gujarat near the famous Sardar Sarovar Dam on the Narmada River, the 182m bronze-clad statue is twice the size of New York’s Statue of Liberty, and 29m taller than China’s Spring Temple Buddha, which previously held the title of the world’s tallest statue.

“When it comes to challenging projects in India, Christie has been the preferred choice for projection solutions due to its excellent track record in terms of performance, reliability and service support,” said Ajay Parwaney, Managing Director, Pyramid Technologies.

Parwaney noted that the Christie Crimson was selected due to a number of reasons, such as its IP5X-sealed, solid-state laser light source in a rugged and compact chassis, and its ability to provide years of reliable and virtually maintenance-free operation. “These specifications are important to the client as the required projection systems need to withstand inclement weather conditions. On top of that, the availability of the longest throw lens that can project bright and vivid images on this 182m-high statue was another major reason why the Christie Crimson clinched the job for this project,” he added.

Harold Bohlinger, Managing Director, HB-Laser, commented, “HB-Laser is honoured and delighted to celebrate the life and achievements of Sardar Patel through the design and commissioning of an exciting laser light show on the Statue of Unity using the Christie Crimson projectors. By combining and synchronising the various multimedia elements together, we are able to tell the inspiring life story of the visionary Indian leader in an engaging manner, whilst delivering a massive multi-sensory impact to spectators.”

The installation and alignment of the projectors had to be completed in less than a week following the final touches made to the statue. All 51 Crimson WU25 projectors used for the 30-minute light and sound show are housed in a specialised enclosure customised to suit the enormity of the application, and fitted in a projection room located about 600m away from the monument. Specialised mirror mechanisms enable the Crimson projectors to display colourful visuals on the statue from such a far throw distance.

“We are absolutely delighted that the Christie Crimson Series has been chosen to illuminate the Statue of Unity, which is a symbol of India’s unity and integrity and a fitting tribute to one of India’s most respected statesmen in modern times,” said Sean James, Executive Vice President, Enterprise & Entertainment, Christie. “Over the years, Christie has built a solid reputation for delivering numerous large-scale projection mapping projects in India. We currently own 90% of the market share for permanent projection mapping installs in India, and 80% of the market share in India in terms of the deployment of projectors above 10,000 lumens.”

Among the key attractions are a viewing gallery at the height of 153m that offers breathtaking views of the Narmada dam, a museum on the life of Sardar Patel situated at the statue’s base, as well as the eagerly anticipated projection mapping showcase where images are projected on the statue’s surface to create light and sound show based on Patel’s life. The Statue of Unity was officially inaugurated by Prime Minister Narendra Modi during an elaborate ceremony on October 31, which coincided with Patel’s 143rd birth anniversary.