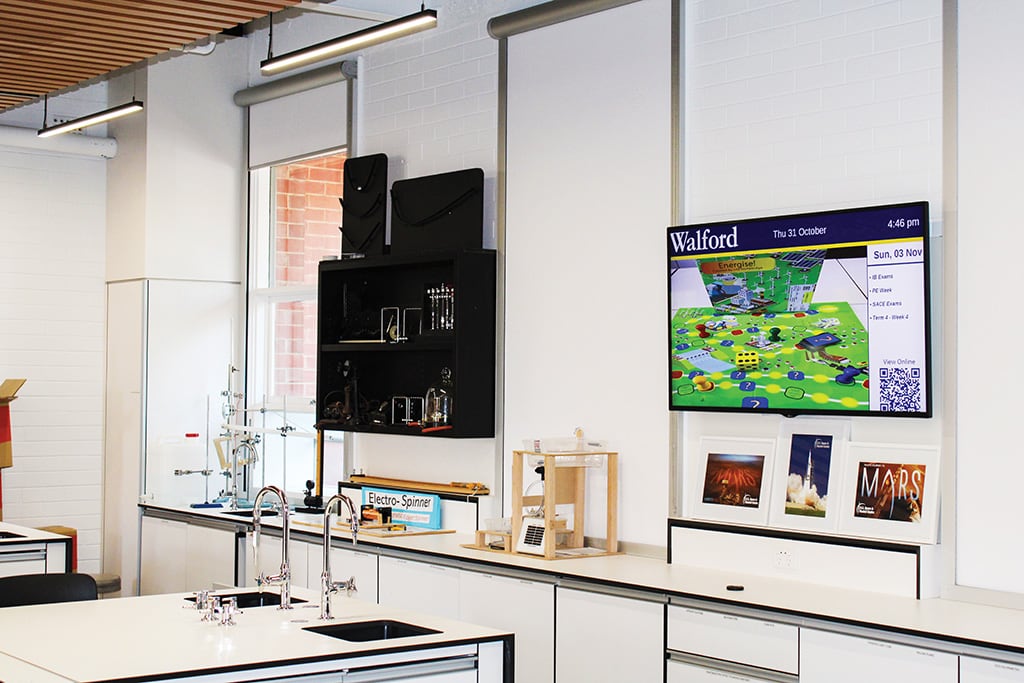 Carousel The Apple of Walford’s Eye

Walford operates on an all-Mac computing ecosystem, and had been using a digital signage system based in Windows that they found difficult to configure, manage, and update. “We had many Apple TVs around the school, and wanted to leverage those over purchasing separate digital signage players for each display. That was how we came across Carousel.”

The integration is made possible via a partnership with Jamf, an enterprise management that helps IT departments bring the Apple experience to business, education and government organisations. Walford IT operations manager Kyle Heading had previously integrated Jamf to manage the school’s iPads, Macs and Apple TVs.

Walford has since deployed Carousel to some of its Apple TVs via Jamf, leveraging Apple’s Device Enrolment Program (DEP). “We configure them as digital signage players, and once complete they are instantly functional as part of the Carousel Cloud network,” said Kyle. “We can very easily add new players to the network with a Carousel app. It is very user-friendly.”

The Carousel software automatically pulls content from the school’s calendar, including upcoming events, photos, and data from Australia’s Bureau of Meteorology. Most content is targeted, with each educational program receiving content specific to their activities. General-purpose content is distributed to main reception desks.

“The Carousel user interface is very easy to use,” said Kyle. “We can quickly get clarity on upcoming events, which we find particularly useful. As parents come in and ask ‘What’s on today?’ or, ‘What’s on this week?’ the Carousel network provides them with a quick reminder. Since the system automatically updates, that information is already there for them. We hardly have to do any work.”

Carousel Cloud suits Walford’s needs in various ways beyond the user experience. The biggest impact has been the cost-savings achieved by not requiring standalone digital signage players. Kyle estimates that they saved about $5000 by using their 20 existing Apple TV devices. Additionally, they save on licensing fees and the cost of dedicated servers for an on-premise system, which would also add to management overhead costs.

Walford anticipates an expansion of the Carousel network as new screens locations are added, and older projection systems are upgraded to flat-panel displays.