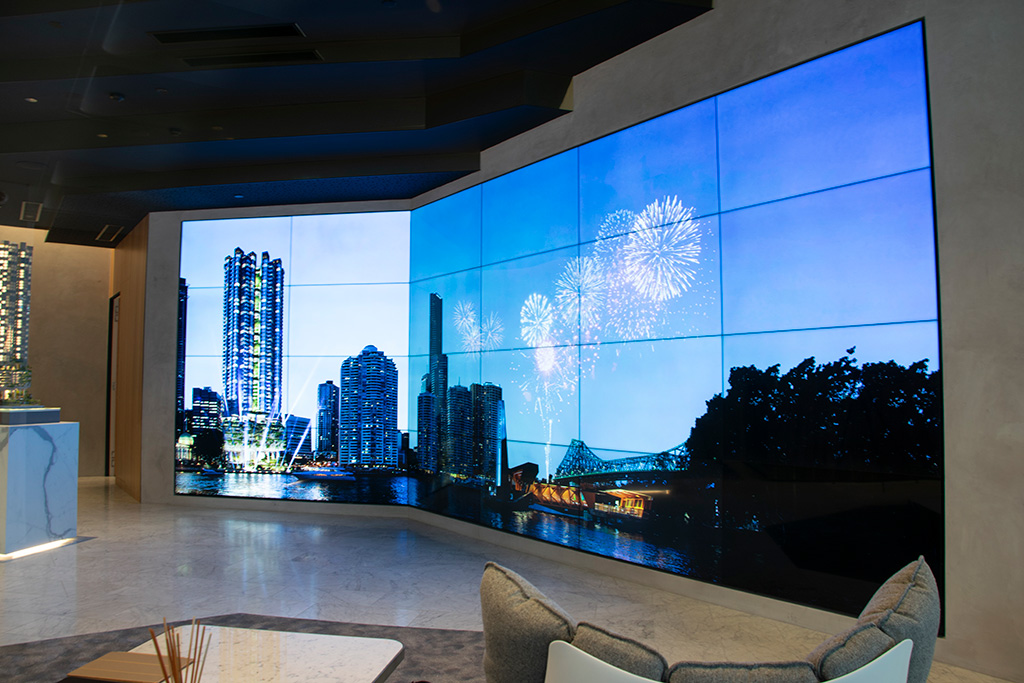 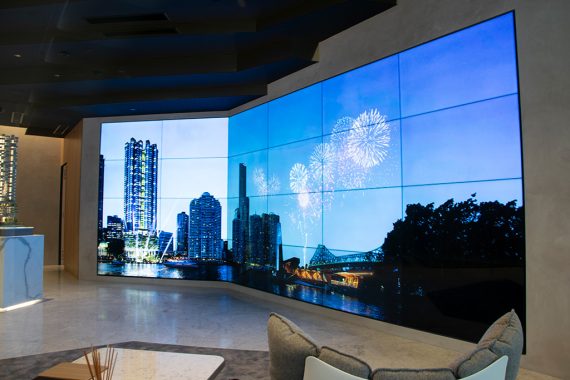 As the age-old marketing axiom goes: people buy with their eyes. Few are more aware of this than property agent and marketing group CBRE.

CBRE is selling apartments in a landmark $350m high-rise development in downtown Brisbane, and the ‘buy with your eyes’ approach has been taken to a whole new level.

Each apartment for sale can be individually virtually inspected. Thanks to some next-level artist’s renderings, buyers can look at the layout and, indeed, the views from their would-be abode.

All this is at the fingertips of the CBRE sales consultant. Via an iPad app the appropriate room is dialled up and shown to the buyer.

But not just any old computer monitor or wall-mounted TV, a huge 6×4 LG commercial video wall.

The impact is exponentially more amazing. The effect of the huge canvas is awe-inspiring.

DigitalSignage sat down with the creative and technical brains behind the video wall, Cuan Naidoo, CEO of Q1 Design, to find out how and why.

Cuan pitched the idea of a high resolution video wall. But not simply a feature that might act as good-looking wallpaper but an asset CBRE could use as an integral part of its sales arsenal.

The wow-factor kicker: this would be an 8K video wall, that could display the architectural renders in glorious detail.

Once Cuan and his team looked into designing a sizeable video wall, they quickly discovered that video wall processors dealing in resolutions beyond 4K were as rare as hens’ teeth, and even then, formidably expensive.

Q1 applied its technical nous to building a custom solution that could provide the processing grunt to run a large video wall.

And after some additional research, Q1 determined that powering a UW 10K video wall was no more or less demanding than an 8K wall.

Some more determined Googling established that this project would probably, arguably, and in all likelihood, be a world first. (Let’s run with ‘world first’ until we’re proven otherwise! — Ed.)

For Q1 Design, the one beautiful spin-off of building their own PC video wall processor was the ability to design their own control app to run the content.

This has proven to be a huge drawcard. Not only is the content impressive, it’s entirely under the control of the sales agent in the room via an iPad.

Cuan Naidoo: “When you think about it, a video wall is a huge investment but they’re more often than not under utilised, simply displaying looping video and pictures. Then when that content goes out of date, the process to update it is so tedious, people don’t bother. So you sink a bunch of money into an asset that is soon obsolete. Meanwhile, this video wall is an integral part of the sales process for the apartments.”

It’s fascinating to watch clients being taken through the sales pitch. It’s impressive to watch as the sales agent, nimbly armed with an iPad, taps a few buttons to instantly change interior layouts, plans and view shots on the 10K video wall. The client is instantly and completely engaged. The video wall might provide the eye candy to attract people off the street, but it’s as a sales tool that it really comes into its own.

ABOUT THE 10K LG VIDEO WALL

The video wall uses 24 x 55BM5 LG Commercial displays. The bezels on these displays are wafer thin at 0.9mm, making them perfect for that virtually-seamless video wall look. They’re also thin from a front-to-back perspective, which is important in a job such as this where floor space is limited and, say, an equivalent LED display would occupy more space. Finally, heat is a consideration. Again, being in a confined commercial space, the efficiency of the LG screens help to keep air conditioning costs down.

Q1 Design and its installation team did an impressive job. When you say an installation has to be ‘millimetre perfect’… well that’s an understatement when the bezel is only 0.9mm. It’s tough enough to precisely align screens in a regular video wall — even with the best mounting hardware — but even tougher when you have an ‘elbow’ articulation in the video wall such as this.

Another advantage of the LG Commercial display is its IPS (In Plane Switching) feature, which helps the display to appear equally bright across the full 120° field of view.

The LG displays weren’t the cheapest option but Q1 was quite determined to convince the client it was money well spent.

Cuan Naidoo: “I use a JB Hifi analogy with my clients: you can look at two TVs in the showroom that spec out the same but anyone can tell the difference between the name brand, like LG, and the no-name knock off.

“You go to all this effort to design something that will stop people in their tracks, so you want to be confident in the display. You want all the displays to look the same in 12 months.

“And don’t be tempted to grey import. We purchased ours through Quantum Sphere and they provide great service and back up. In fact, on this job I don’t mind telling you, one of the panels arrived damaged — it can happen. The Quantum Sphere guys sent over a replacement immediately. If I’d grey imported the equipment, that one dead panel would have negated any savings.”

Finally, a word on the 10K resolution. Most technical types will tell you’re flushing pixels down the toilet and paying more than you need to. But in an application such as this where the client is viewing the wall from only a few metres away, the extra pixel count is appreciated and the results are sublime.