Perth Stadium, or now, Optus Stadium, thanks to a rumoured $50m naming rights deal, is Australia’s newest major sporting venue and the third-largest sporting stadium in the country by capacity, with 60,000 seats. Since opening in January 2018 the venue has already hosted several major sporting events including One-Day International Cricket, Big Bash, Rugby League, and Rugby Union; plus two sold-out Ed Sheeran concerts; and of course a dozen AFL games, in less than six months.

At a reported cost of $1.6b, everything about this venue is massive. The stadium boasts two of the biggest screens in the southern hemisphere, plus more than 1000 displays spread throughout the interior.

The entire complex was built by Multiplex; the original audiovisual specification was developed by consultants Marshall Day with Rutledge AV taking over the responsibility for construction delivery.

“While we obviously took note of Etihad Stadium, the MCG, and, of course, the Adelaide Oval, we tried to take a ‘clean slate’ approach, because the outcome Optus Stadium wanted was a ‘fans first’ experience in a multi-purpose stadium,” Elijah explained. “A stadium used for so many different sports events, as well as concerts and everything else is quite rare. There are not many other stadiums around Australia that can support that.”

The impressive Daktronics LED displays in the bowl are 10.24m by 33.28m (some 8 million pixels, all up) but the horsepower and manpower behind these monsters is even more impressive.

The turnkey contract with Brookfield Multiplex was for the design, build, installation and maintenance for all LED displays and control system at Optus Stadium. The sheer scale and complexity of the operating functionality and integration with the audiovisual system is by far the most advanced and complicated installation within Australia.

To give a sense of the job at hand, Daktronics Australia’s Blair Robertson shared the extent of the manpower involved over the course of the installation and three-month commissioning phase:
• 3 full-time project managers
• 10 full-time installers, 12 months on site
• 2 mechanical engineers
• 1 electrical engineer
• 1 thermal engineer
• 1 programmer

Rather than being a couple of digital scoreboards, or ‘dumb’ endpoints for content, the Daktronics control system (the Venus Control Suite) provides a single point of control for all LED and IPTV displays throughout the complex.

The control suite was tweaked to send triggers to the sound and lighting system providing a synchronised presentation for the Philips lighting and audiovisual set pieces (the stadium is something to behold when in full ‘Vegas Mode’!). The Venus Control Suite also allows the stadium to access diagnostics status for any LED display within the system (including remote access).

Using Real Time Data (RTD) integration with Champion Data, the Daktronics can display the latest stats from other games of interest to patrons including AFL, cricket, rugby union/league and soccer. 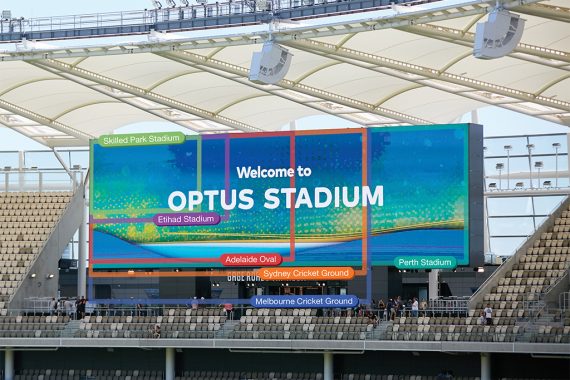 Daktronics dominates the Australian stadium LED screen market — with screens in 18 of the most significant stadiums. The two in Perth Stadium are the biggest stadium screens in the country.