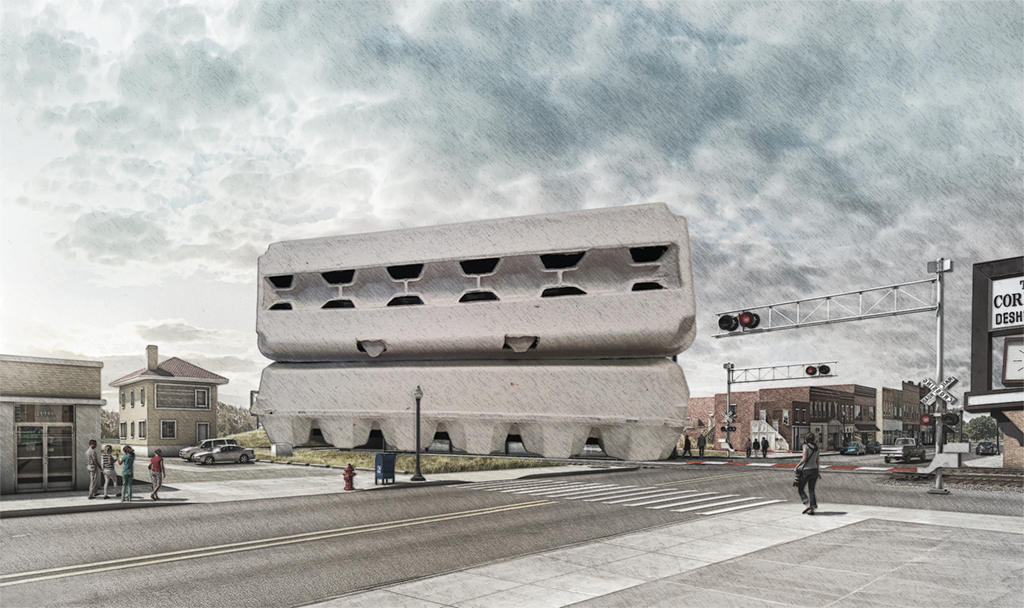 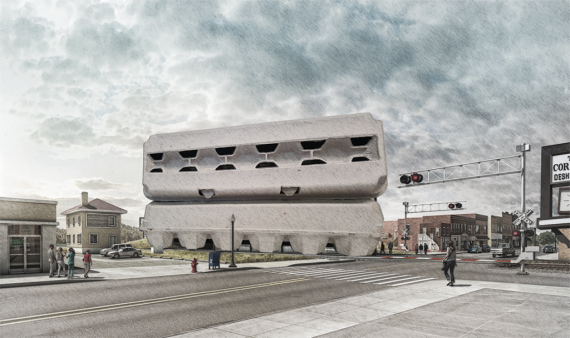 After some extensive research (meaning, I bought a six-pack of beer, a packet of chips, and I surfed the net) I’ve discovered how architects design modern public buildings nowadays. The secret is in the conceptual stage — when they create those big plastic, table-top models with model trains and papier-mâché parks, and Lego characters.

For the main building they take a perfectly square, cardboard box (or rectangular, probably) and sit it in the middle of the table. Then using a laptop with specialised, architectural design software installed, they smash the computer on top of the cardboard several times until it’s all squished into weird shapes and poking out in odd angles — and say, “There you go. We’ll build that.”

Think I’m wrong? Have a look at Federation Square. The new-ish UTS building. And the new ICC Sydney is another example, except maybe they used a smart phone for the cardboard-box-bashing thing instead of something heavier. It’s not quite squished enough.

It’s all very well for architects to decide that crazy contours and whacky windows can provide some sort of character, but they’re not the poor bastards who have to hang a painting on the wall — or any digital signage, for that matter. Have they seen the latest high-resolution displays lately? Sure, maybe they can show 8K resolution in 40 gadzillion colours, but they’re still square and flat. Square and flat, right? Is that so hard?! Maybe, before any architect is commissioned for a building, they should be made to pass one of those kindergarten tests where you have to shove a square peg through a round hole?

There’s been a trend for years now that, rather than have some kind of digital signage screen, the building has a digital signage wall. It doesn’t matter what shape is involved, the entire wall is the display. The ICC Sydney Birdsmouth entrance to The Theatre is a perfect case in point. Which means the graphic designers for any digital signage displayed there are going to need a lot of coffee and doughnuts to come with images that will work on an obtuse, squircle-shaped nonagon. Good luck with that. Imagine the things that could go inadvertently wrong trying to display innocent people and products on bizarre-shaped surfaces. A Presidential visit? Donald Trump’s hair might be distorted into something really, really silly, for instance.

Don’t panic, ultimately I reckon the problem will go away, because I also know the real future of CBD architecture. It’s almost inevitable. If you’re one of those folks who can never quite grasp the math behind screen resolutions, pixel size, dots-per-inch and all that other boffin nonsense about the size of your telly, you might want to look away now.

Buildings of the next decade or so will be constructed entirely of display screens — the outside, at least. Every square centimetre of any office block, apartments or skyscraper will be just pixels. Which means there won’t be any need for weirdo-inspired shapes and architectural, think-tank design sessions involving mind-altering drugs. Everything will be nice and square — and will look entirely different every day. Forget about advertising, I mean total appearance.

Imagine it. Every morning, the CEO of the company will say, “What building do we want to be today?” The decision might be to mimic the Empire State Building and voila, thanks to digital signage, modern technology and a rather pedestrian imagination on the part of the CEO, the entire outside of the office block will transform to display a full-sized image of the Empire State Building, complete with King Kong and a scantily-clad Fay Wray, if you like. The next day it might be the Eiffel Tower, or the Taj Mahal. The possibilities are endless (if you’ve drunk as much coffee as I have this morning). In decades to come, with the whole CBD comprised of pixel-only structures, cities could decide to reproduce other cities for a laugh. So, one day, at the flick of a switch Sydney might want to look like London, or Adelaide will want to look like… well, anything would be an improvement.

There will some small problems. Lots of people will smash their noses into virtual doorways instead of the real ones. And the posties on their little red scooters will struggle to deliver the mail properly, because they can’t find your mailbox. On the plus side, those window-cleaning guys who abseil up and down skyscrapers will be a growth industry — until they invent the self-cleaning digital display. By the way, if you’re worried about electricity demands and the power grid, don’t. By then, structures the size of the Sydney Harbour Bridge will be completely powered by a single AAA battery.

More importantly, we’ll be rid of these ‘squashed cardboard box with an egg carton glued on top’ public construction designs. We’ll have proper buildings with proper corners and sides, and normal doors. Because future architecture will demand they be nice and square to accommodate gluing thousands of digital signage screens to the outside. Common sense will prevail.

I hope you all appreciate that someone is using their imagination around here.